A Thai style hot pot served in an earthenware pot where the ingredients (meats, vegetables, mushrooms, noodles) are cooked in a clear herb broth of lemongrass, galangal and kaffir lime leaves.

Additionally, the broth can contain other herbs such as kaphrao (Thai holy basil), spices such as chillies, or in addition be partially meat based, using, for instance, pork ribs as one of the base ingredients.

It is served with one or more nam chim (dipping sauces).

A soup of Chinese origin, usually containing offal, often pork liver and intestines, also boiled eggs, and other meats such as crispy pork.

Alternatively, at regular noodle soup shops, it can also be as a regular Thai-Chinese noodle soup but then served without any noodles.

Mu kratha resembles a combination of a Korean barbecue and a Chinese hot pot.

Meat (most often pork) is grilled in the centre while the vegetables and other ingredients, such as fish balls, cook in the soup.

It is served with a variety of nam chim (Thai dipping sauces).

It is eaten with khanom chin (Thai rice noodles) or steamed rice.

Although the name of this dish is often shortened to nam phrik pla thu, this refers to a certain type of chilli paste in which pla thu is used as an ingredient. 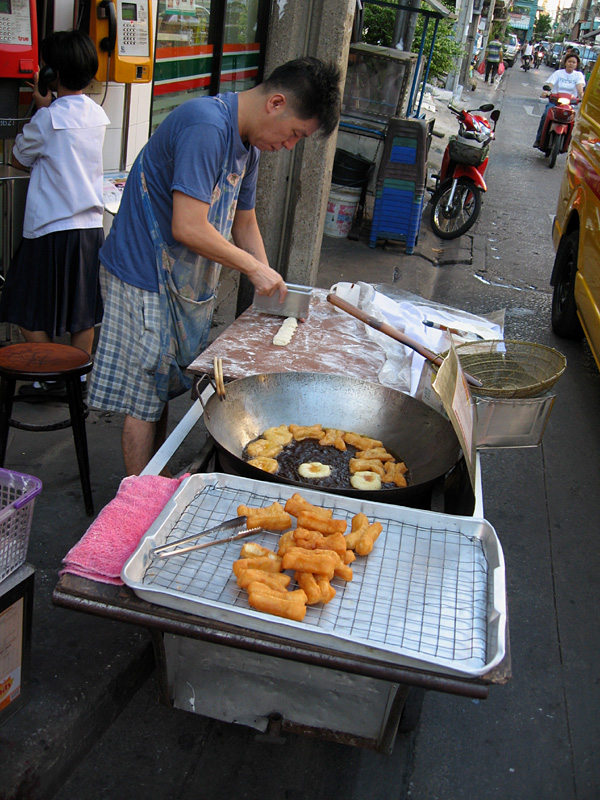 The Thai version of the Chinese crullers called youtiao, they tend to be smaller than the Chinese original.

Most often eaten with sweetened condensed milk or with Thai coconut jam, they can also be served with chok, Thai rice congee.